In June 2015 my parents, Nick and myself went to the British Airways Open day at the Engineering site at Heathrow Airport thanks to Nick. 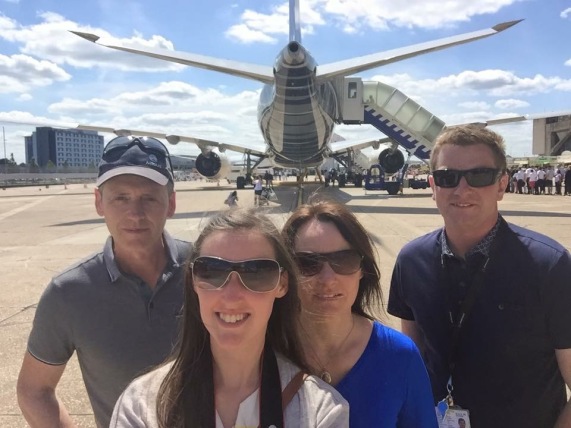 I can still remember this amazing day now like it was yesterday. It was set up over 2 hangars and the tarmac it consisted of getting up close and personal with the aircraft, as well as seeing new technology available to the airline as well as outside companies there showing off their products.. not forgetting the ridiculous amount of freebies (I mean who doesn’t love freebies!!)

We managed to have a look around G-ZBJB BA’s Boeing 787-8 and this was my first look around a Dreamliner and I have to say I wasn’t overly impressed don’t get me wrong I think the window technology is amazing especially the size of them and I love the First Class that BA offer, I just don’t really like the 8 version, I’ve since been on a 787-9 and really do prefer it.

Possbily my favourite aircraft we looked at and where my love for this aircraft began was Airbus’ A350 which was there to see and have a look around and underneath! It is amazing the technology on this aircraft and it’s very pretty too (yes I described a plane as pretty haha!) I was so impressed with the cabin, the humungous galley at the back which is bigger than the 787 galley but also the engines are giant!! I’ve since been on this particular aircraft twice now when I went to Farnborough Airshow check out the blog post here I can’t wait to fly on one hopefully sometime soon.

I’d never set foot on a Boeing 777-300ER before but had the chance on this day, and woah is it long, I feel like it would be a great aircraft to travel on and the crew resr area at the back was spacious too, we had a good look outside the aircraft too including the engines and undercarriage.

The day was fantastic and we got involved with a Manual saftey demonstration which was very fun, we got to see Concorde which was towed into the Hangar especially for this event, we spoke to Airbus, Rolls Royce and other companies.

I don’t think BA will do a day like this again this year due to the new Chairman and CEO which is a disappointment neverless this day was fantastic and not only did I learn about the BA product but I also fell in love with the A350 and had a fantastic family day which my Mum and Dad really enjoyed so nice having a geeky family too!